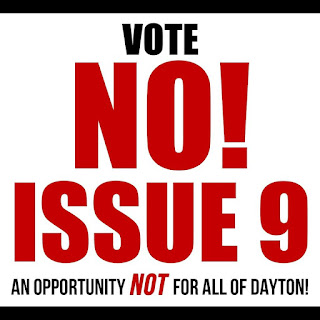 The City of Dayton wants to increase the local income tax from 2.25% to 2.5% so that it can raise an additional $11 million to spend on services that 60 to 70% of the people paying the tax will not benefit from because they live in suburbs outside the city limits. I wouldn't want the citizens to be hoodwinked. Let's study this more closely. Here is what the ordinance states regarding the use of the funds. 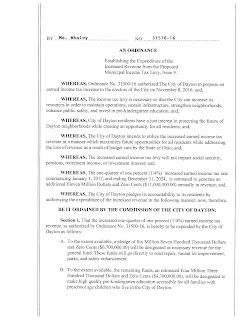 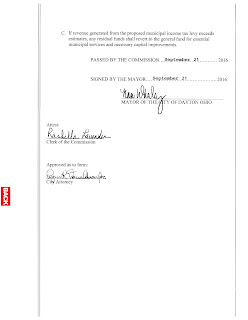 The City is paying the general fund the first $6.7 million. To be vaguely used for services that they already provide. To the extent of available funds they are giving $4.3 to a private non profit to fund one year of affordable pre-school to what amounts to 750 children. That is $5,700 per child. If there is surplus after that, well, it goes into the general fund as well. There is no guarantee they will use the money for what they are telling us it will be used for. Here is what the local paper stated in June.

"The tax increase will help close a $5 million funding gap. It also will pay to maintain fire services, add about 20 police officers, roughly triple the amount spent to pave and resurface residential roads, improve parks and better maintain vacant lots, said Shelley Dickstein, Dayton’s city manager." ....."The city is earning the same amount of money as it did in 1998, which is insufficient to sustain current service levels and pay for strategic investments, Dickstein said."

You can see by this ordinance passed on September 21, 2016 that things have already changed. There are no dollar amounts assigned to policing, road repairs or park improvements. Here are reasons to vote NO on Issue 9.

1) First and foremost you would like to trust your government, right?  Actually they are misleading you. We need to  realize that the city general fund budget for 2016 is $160 million. In 2009 it was $160.7 million. So we are operating at pre recession levels not 1998 levels when the population in the City was considerably higher.

2) We also need to ask if the 20 police officers are in addition to the current force or if they replace 20 officers that have retired. Oh wait. The ordinance doesn't state they will be adding 20 officers. That is all hot air.

3) There is no funding gap. This is a proposed budget on paper. They can balance the budget with no tax increase. They just can't do extra things they want to do.

4) The City just approved a bond issue on 9/21/2016 for road repairs totaling $5.4 million and $4.4 million for new vehicles. If the tax increase is approved they will spend the bond money now and use the extra tax funds to pay the interest on the bonds.

5) The police department budget has only increased 3.26% since 2013 while the City manager office and commission office budgets have grown over 19% in the same time frame. If fire department budgets are to remain constant at $38.5 million a year, why do we need more money to fund something that isn't planned to change?
You need to ask Mayor Whaley who paid for her trips to Germany and Bosnia in the last year. Staff could visit sister cities. The mayor needs to focus on Dayton. The Commission office budget in 2013 was $960,973. In 2016 it is $1,144,900. A $183,927 increase. Why? The City Manager budget has grown by $221,283 since 2013. We lost Tim Riordan. We lost Warren Price. We lost Stanley Early, an assistant City Manager. Since March 2013 the law, director, fire chief, economic development director and the public relations director have all left. Between 2010 and 2013 no department heads left on their own accord. A building services director was fired for wrongdoing.

6) The pre-school promise, which is a noble idea, will get a fixed amount of $4.3 million (if the funds are available). It will not solve the problems in Dayton Public Schools. A year of pre-school for children who's parents can't afford to drive them to school and for which there is no legal requirement for the public school to provide transportation will not work as long as these same children suffer from food insecurity AKA hunger. If the difference between school lunch and school breakfast the next morning is 20 hours and there is no food at home, these children will never learn because they are trying to stay alive and learning has little or no value when you are in survival mode. This portion of the tax increase does not address one of the main reasons children in Dayton fail to graduate. It would be more effective to provide every one of the 6700 babies born in the county a copy of Dr. Tizer's "Your Baby Can Learn" DVDs at $50 each if bought in bulk and award the parents a $200 income tax credit if their child is reading by age 3. This would cost $350,000 the first two years and less than $2 million a year after the third year and impact the entire county, not just the City of Dayton residents. By age 3 most of the county children would be kindergarten ready if they watched those DVDs starting at 3 months old.

7) The purpose of city government is to provide safety services to citizens. Not education and not economic development. Education is the responsibility of the school district and the state. Economic development should be handled by the Chamber of Commerce. Right now your tax money is being squandered on real estate speculation around the central business district and development is being steered and controlled by government.

Vote NO on Issue 9 and force this administration to go back to the drawing board to find ways to use your money more effectively and efficiently to solve real problems.