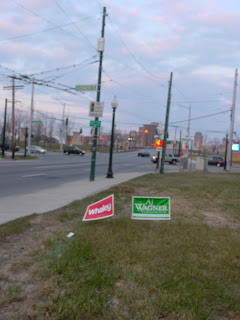 I would like to point something out. As an Independent Mayor I can do this without political retribution. There is a law here in Dayton and it seems that it has been in force since 1925. I have underlined the relevant sentences.

Sec. 110.13. - Advertising on public property.
(A)No person shall place any placard, notice, or advertisement of any kind on any public property situated in any park or on any boulevard or levee in the city.
(B)This section shall not be construed to prohibit the placing of appropriate advertising signs by the park management of articles for sale in the park or signs containing the necessary notices of the park management in any park within the city upon permission first received from the Director of Human Resources.

Here is the penalty

(B)Whoever violates any other provision of this chapter shall be guilty of a misdemeanor of the first degree.


Signs in the right of way are ugly and make our city look awful. The people know it and they don't like it. They tell me every day how bad this makes the street scape look. Even I notice when they go up, often many disappear soon afterwards.

What is most interesting is that the two candidates vying for the title of MAYOR, who is a member of a body that enacts legislation, are willing to break the law in order to get elected. What is particularly disturbing about this is that one candidate has been on the city commission for 7 years and should know better. The other candidate is a former county auditor, judge and lawyer and should also know better .....


Here is a solution to the problem. Upon application for a permit and remittance of a $200 permit fee, candidates for election can place their signs at designated intersections within city limits 30 days prior to an election. Signs can not be placed in the meridian of a road or anywhere along the length of a road, only at designated intersections where signs will not block line of sight for traffic. The candidates have 10 business days to remove signs after said election otherwise the City will collect signs left over and dispose of them. (The fee pays for this service.)
Of course this won't happen in 2013 but I would be happy to introduce this in 2014 when re elected. In the mean time I am placing my signs on PRIVATE PROPERTY. If you ever see one of mine in the right of way then you have my permission to remove it. I would hope that you would inform me so that it can be collected and reused but I understand the logistics!

So many Realtors are guilty of this as well..and they've all been trained to obey each jurisdiction's ordinances. In my own neighborhood, there were 4 different Realtors with their signs in the public right - of - way. A couple of weeks ago I noticed some yellow signs posted on telephone poles throughout the city..I called the number and it was Dayton Towers! I told them that it was illegal to post their signs in the public right of way, but they didn't seem to care. I took some down and noticed other good citizens removing others as well.

Where can we get a Leitzell sign for our front lawn?

Email me an address at Gary@daytonmayor.com

So many signs are posted at the corners of Wayne and Watervliet Ave. and are never retreived after the election. besides an eyesore, they leave behind a "wire type" sign stand eventually falls down into the grass and becomes dangerous to walkers and the grass mowers who do not see it.

There are still Debbie Lieberman signs from the November election in the field on Klepinger across from Kroger on Siebenthaler. If DL wasn't so busy campaigning for NW, maybe she could find a few minutes to remove her signs.

I don't live in Dayton, but if I did, you would have my vote, Gary! I am already tired of the commercials from your opponent. They are on channel 7 every five minutes, so I have stopped watching the news until after the election.