I am disgusted. Commissioner Whaley has disgraced herself and has proven that she can NEVER be a role model for our children. She really needs to apologize to the citizens of Dayton for attempting to divide the community. She should probably resign her seat as City Commissioner because she is not acting in the best interests of the city and should be ashamed of what she is allowing to happen.

To paint me as a racist and the other mayoral candidate as corrupt before either of us are even on the ballot is an attempt at defamation of character. This is a really low and desperate attempt to elevate yourself at the expense of bringing an entire city to it's knees after three years of phenomenal progress.

Her campaign is doing a push poll. This is an attempt to sway the opinion of a voter with misleading information. The actual polling means nothing. They don't track the results. You are being scammed and it will cost you twenty minutes of your life. Of course she will say that she has no idea that the Democratic Party is doing this for her. That is a lie. She is the candidate. She has final approval and these questions came from her sources. She should never have accepted the party endorsement because the party is not helping her.

Here is the transcribed text from the push poll. You can find the original sound recordings HERE. You can also read more about this at Esrati.com.

Ok Leitzell once said quote, “I am not racist, I am prejudiced”.


So Leitzell used the ethnic slur to refer to Asians and said black history was not real history and he also compared people living in government-subsidized housing to animals and said it was amazing that an African American would be able to set up a successful business in Dayton without government help.


We need a mayor working full time to move Dayton forward but Leitzell took an entire month off to renovate his home and even wrote about a project on his personal blog.


Leitzell Recently commented on a blog that he wants to raise his pay as mayor to $90,000 a year.


Leitzell is not fighting to improve Dayton’s Public Schools and says Leitzell has attacked some students calling them quote “too stupid for the military” unquote and saying they were even, not even good enough to be quote  cannon “fooder” (sic) fodder, or something, for the um, army.


And Leitzell said he would never send his own daughter to Dayton Public School because she would get bored.


Crime is a serious problem that Leitzell actually said not all murders should be treated equally and Leitzell said the only reason Dayton families are concerned with crime is because the media quote “hypes homicides.


And um we’re just about done thank you now


I’m going to read you some reasons people have given us to vote against A.J. Wagner for mayor. After each thing tell me whether you think it is very convincing, somewhat convincing, not, not too convincing or not at all convincing.


Um, Do you, as a reason to vote against A.J. Wagner. If you are not sure about a particular item just say something on the box.


The state bar association gave Wagner the worst rating of a judge rating, rated in Ohio in, um, 2006.


Wagner’s court was responsible for losing an evidence envelope containing 400 dollars collected during a drug raid and Wagner even sentenced a murdered, murderer convict, convicted of beating a man to death, to just ten years in prison, less than half the usual 25 years.


That Wagner approved $300,000 in bonuses for county sheriff and his staff even after the county commission passed the resolution for him to give up some of his Wagner even gave his own staff bonuses that same year.


Wagner is more interested in being a politician than a public servant, public servant, over the last 20 years Wagner has served as a paid political operative and campaigned for five different taxpayer funded jobs.


Wagner even retired with his government job so he could collect his taxpayer funded pension. Now he’s running for mayor so he can collect another 45,000 dollars of taxpayer money on top of his (?)


Wagner put campaign donors with special interests first. As auditor Wagner gave a millia… multi million dollar government contract to a company that donated ?bucks? to his campaign and Wagner was the guest of honor at a private dinner at a private Dayton philharmonic pops concert paid for by a lobbyist seeking millions in government spending.


Eh, ah, got another one


And now I am going to give you some reasons people have given to vote for Nan Whaley for mayor. After each brief tell me whether you think it is very convincing, somewhat convincing, not too convincing or not at all convincing.


Whaley led the fight against $3 million in cuts to Dayton’s already struggling schools. Preventing teachers from being fired, prospects from going up, stopping sports from being cut.


Whaley also wants to improve our schools, by holding them accountable for kindergarten readiness, 3rd grade reading proficiency and preparedness for college.


Nan Whaley has fought to keep jobs in Dayton. Whaley worked with city leaders and executives together to keep Caresource in Downtown Dayton and Whaley put efforts to bring GE Aviation and the NCAA tournament to Dayton, creating hundreds of jobs and generating millions of local businesses, for local business


Nan Whaley is the only candidate for mayor endorsed by the Democratic Party and Dayton Firefighters and other labor groups have also endorsed Whaley because she brings people together and fights for Dayton families.


Whaley is working to keep guns off the street and out of dangerous hands.


Whaley will fight to require background checks on every gun purchase to prevent criminals and the mentally ill from having access to guns.


Whaley says government needs to do more with less during tough economic times, that’s why Whaley voted to reduce her pay and hasn’t expected a pay raise in her, in the last 5 years as commissioner.


Survey Sampling International please answer these demographic questions for clarification purposes only, and do you think of yourself as a Democrat or a Republican or an independent


And what is the highest level of education that you have had the opportunity to complete?


In your home do you have cable television, satellite or direct TV just regular broadcast television or no television.

I will not accept any endorsements during this campaign. I learned four years ago that endorsements are worthless unless they come with copious amounts of money or feet on the street. Most come with nothing more than an "ata boy!" and a pat on the back. However, I am not seeking tons of money, though feet on the street are always useful. Nine days ago I got a solicitation from AFSCME and have included it here. This really made me angry. A union is soliciting a candidate in a non-partisan local election to see if they want to endorse the candidate. To me that is so wrong. Shouldn't the candidates solicit the unions if they are so inclined? Anyway, based on previous experience, it is obvious they will endorse the Democratic Party candidate. That is what they do. Best thing they could do is not endorse at all and let their members vote as they choose. After all, it is a non-partisan election. I finally got some time today to read the form and guess what? It was due back two days ago! I am documenting this here because I know the union president will say that I didn't complete the form or show up for the interview so they couldn't endorse me. The truth is that I believe that if I can't win on my own merit then I don't deserve the position. I am also confident that I can win on my own merit and impressive track record. Anyone who needs endorsements or the support of a party in a non-partisan election lacks the confidence needed to do the job. 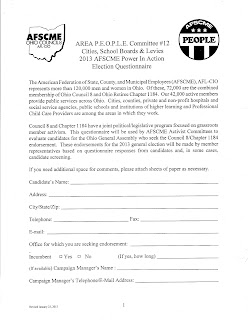 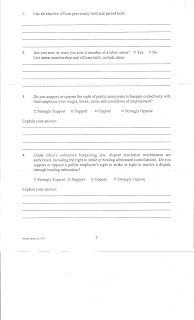 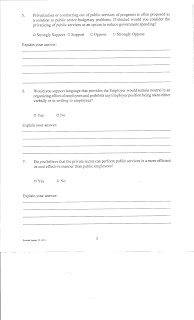 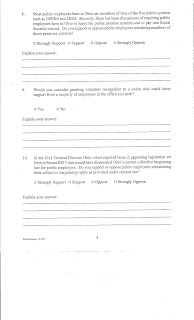 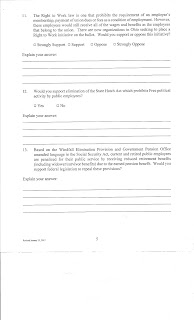 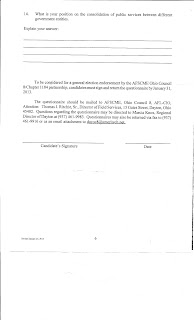