How to Run for Office in Dayton

If you would like to run for a seat on the Dayton City Commission or would like to run for the office of Mayor here in Dayton then let me tell you what you need to do in order to get on the ballot. The first hurdle you will run into is the requirement that you need 5 members of a nominating committee who are registered voters living in the City of Dayton. These five people have the duty to nominate a replacement for you if you should withdraw later in the game after getting on the ballot. They can be friends, acquaintances or family members but all must live in Dayton and be a registered voter. The next hurdle is the requirement that you get 500 qualified signatures from registered voters residing in the City of Dayton. This means that you need some 750 to 800 people to sign a pre-printed City of Dayton petition form that claim to be registered voters in Dayton. These forms can be collected at the City Commission Office or the Montgomery County Board of Elections. You will have to sign for them and the Board of Elections is charged with giving you additional information regarding campaign finance.
The form is awkward in its wording and is difficult to understand how to complete the top section. The following picture is from one of my forms showing how to fill the blanks. 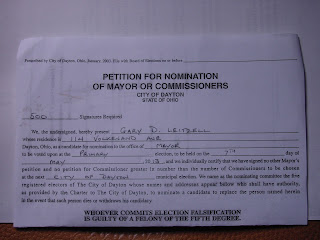 The back of the form is a little easier. Whoever collects the signatures has to fill the upper part out and get their signature notarized before the forms can be submitted to the Board of Elections. 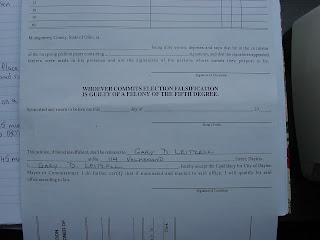 You need only fill out one form and then you may make photo copies of it and use those copies as your petition forms.

Now you need to collect the signatures and you have until the end of February to get them. I wrote a post back in 2009 when I ran the first time that explains the best way to do this. Some of that information is reinforced in this post. There was no one helping me or coaching me back then on how to do this. Maybe this information can help you. The process will require at least 75 hours of spare time and there is a right way and many wrong ways to go about getting the signatures you need. Going door to door with the voter walking lists that the Board of Elections can provide for you as a .pdf file, will yield on average 10 signatures an hour. If you attend a neighborhood meeting and get ten people to sign it you are doing good but in many cases you will get just three or four. Expect people to ask you questions like "Why are you doing this?" and "What can you actually do to make things better for me?"

Start getting signatures as soon as possible. It is easier to get them during warm weather when the days are longer than in the middle of February when it is 10 degrees outside. People don't like to open their doors to strangers when it is dark out either.

Make certain that people sign their names like they do when they go to vote. If one person prints their name, everyone else you ask will print their name beneath it and their signatures will not be valid. Expect people to tell you they are registered to vote when in fact they are not. Have them sign anyway but go and get at least 150 to 200 more signatures than you need as a safety cushion. When people are hesitant, remind them that you are not asking them to vote for you at this time. You are asking them to help you get on the ballot so that you are one of their choices.

Generally, people running for re-election would not provide you with this information. They tend to not want competition so as to assure their ability to be re-elected. Not me. I support the system and feel that if more people knew about how it works then we would actually produce better public officials. Competition makes me want to do the best I can to support the people who elect me. The lack of competition or being assured a majority vote along party lines will produce a mediocre candidate who only has to perform at a minimum level to get elected.
Once you are on the ballot you need to raise some money to pay for signs, literature and any type of advertising you need in order to get elected. I am willing to limit my spending to $10,000 cash and $10,000 "in kind" donations which should help level the playing field for every candidate for this next election cycle. There is really no point in trying to raise any money for your campaign until you are on the ballot unless you have other political aspirations or are already a career politician lining your so called "War Chest.".
Posted by Gary at 4:01 PM 8 comments: