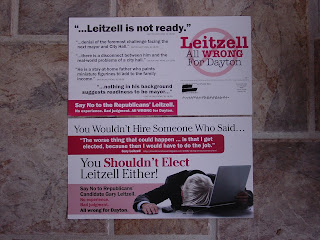 The Ohio Democratic Party is at it again with the smear mailings. They hammer on the same lame points that they have hammered on for the entire month of October. This makes a total of eight mailings for the incumbent mayor and quite honestly I could have found a better use for the $80,000 it must have cost her. Five of the eight pieces mention me by name and the last two it seems were both mailed to the same people who got them on the same day. Both are so similar that my guess is one never got read. They have already put people off who were undecided who to vote for. This was an ineffective waste of money. Let me tell you why.

The democratic party machine is so scared that their political icon is going to lose because their polls told them that. I told the press months ago that as a strategy, the incumbent would have to go negative on me and they are going to have to get really dirty. They would do this in order to cause me to react in the traditional manner that political campaigns take. They want me to go negative. However, my going negative would sour voters on both sides and people wouldn't come out to vote for either mayor candidate. That is what the democratic party wants. They don't want you to vote. It is the only strategy they have because they are running this like a typical campaign.

When you mail things out that are negative about the alternative candidate you need to be certain that everyone knows that candidates name. If you have little or no name recognition like me you are wasting your effort because you are telling people that I am not able to reach (due to lack of resources)that they have a choice on election day. In effect, you are helping to promote the other candidate (me) by telling people lies. 60% of the incumbents mailings have been focused on me. 25% have been focused solely on me. If you focus on the positive aspects of your candidate and not the negatives of the alternative you demonstrate that your candidate has merit. Unless of course there is nothing positive to focus on.

Our civic leaders claim that they want to groom leadership from the community. When a citizen finally rises up to the occasion, they gang up and try relentlessly to beat you into submission. Way to go civic leaders of Dayton! I am not your typical political candidate. It is time to groom new leadership in Dayton and lots of it.

From a marketing point of view, the Ohio Democratic Party has helped me incredibly. I have no money for mailings. I can't reach every voter. I don't need to. The democratic party has done it for me!

I would like to thank the Ohio Democratic party for their support during this election season. I couldn't have contacted everyone without you!


Here are the results of the Dayton Daily News Poll regarding this negative mailing as of Thursday October 29th at 2:30 PM

What do you think of the Ohio Democratic Party's campaign mailer against Gary Leitzell?

The DDN article said the Democratic party in Dayton spent $10,000 per mailing and did two, so $20,000 *just* on these... How much have you raised/spent in total Gary ? 3/4 of that as I recall ! And the best part is, these are sent to registered Democrats !! Are they afraid Democrats won't vote the party line ? :-)

The DDN said you filed with the ethics board, were rejected due to no notary and then resubmitted. Any update on that? Will anything be done in time to make a difference on election day?
To an extent, these sorts of mailings are part of the political game and it is no surprise a politician would do this... but they do seem a lot more blunt than I've seen in other elections before.