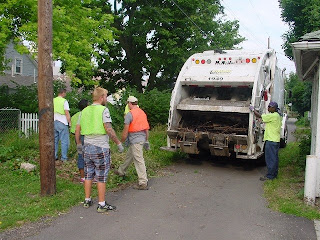 I volunteered to help our neighbors in Twin Towers neighborhood with their alley sweep. Our city used to allow neighborhood groups to organize alley sweeps in order to get rid of trash and debris that accumulates in our alleys due to negligence. About 5 or maybe 6 years ago the city made the decision to stop offering these alley sweeps. I know this because I wrote a grant application for $20,000 from a Community Development Block Grant Fund to get the money necessary to pay the city to continue the alley sweeps. I dressed in a top hat and tails (like a magician) to do a 5 minute presentation before a committee that decided where the grant money would be applied. We were not awarded the grant but the presentation made a lasting impression on the members of the committee who worked for city hall that the commissioners made the decision to set money aside to accommodate 20 alley sweeps that year and every year since.
This is one of those little things that I did many years ago that few people know about. Something that continues to make our city a better place to live today. I guess my point is this; if you don't like the policy or law, fight to change it. In this case, rather than go to a commission meeting and complain (which would have had little effect in the three minutes allotted and no discussion afterward) I took my case before a group that had the power to influence the top decision makers and the end result was acceptable. In reality, the result was better because if the grant was awarded, the alley sweeps would have only benefited a few neighborhoods for two years.

When we were almost finished, one of the city drivers took this group picture of all the volunteers. I'm on the far left wearing the Dayton Dragons hat. I'm not afraid of hard work to make the community better.

It began to pour with rain at 11:30 so a few spots will need attention this week. Twin Towers has a good group of committed residents that will make sure the job gets finished in the next few days. 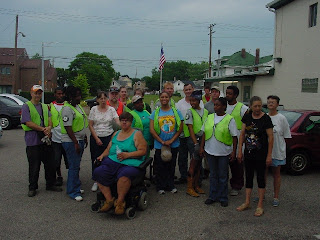 In these tough economic times, I appreciate all the day-to-day hard work of our city employees. This is why I think it is a great idea to host an appreciation week. I would like to declare the week of August 3rd through August 9th as "City of Dayton Employee Appreciation Week." Wave "hello" or nod your head to our police, firefighters, emergency medical teams, waste collection workers, recreation and park personnel. To show their appreciation, the following local businesses are offering a 20% discount on meals served at their establishments to all city employees who show their City of Dayton badge. Alcohol is not included, of course!

If any other businesses would like to offer a 20% discount to City of Dayton employees during this week, please email Gary@Daytonmayor.org or call 253-1359. We will then add you to the list.
Thank you,

We are fast approaching a time when my campaign is going to be moving at full steam ahead. I still need to raise funds for campaign signs, literature, direct mail, polling and phone calling. I came up with a quick and easy way that everyone can help. If you make a $25.00 donation between now and July 11th through PayPal using the link below or the button from my web site at www.daytonmayor.org or this blog you will receive a campaign T-shirt and a yard sign within a few short weeks.

https://www.paypal.com/cgi-bin/webscr?cmd=_s-xclick&hosted_button_id=6383721
Please state the size of the T-shirt that you will need in the "add special instructions" section and list your address so that the shirt and sign can be left at your address by a member of my campaign team.
Please feel free to forward this message to anyone that you feel may wish to contribute.
Thank you for your support.
Posted by Gary at 12:23 AM 1 comment:

Several years ago, when I first became the president of my neighborhood association, I embarked on a project to improve the look of one of our street corners. You can read about it HERE and HERE. The building has had nothing done to it since. Until late last year when someone spray painted the front. I finally got tired of seeing this. So yesterday I rummaged around in my basement where I found some cans of paint left over from the project. Since my daughter was eager to try her hand at painting on some walls, which I wouldn't let her do inside our house, we took these cans of paint and cleaned up our neighborhood just a little. 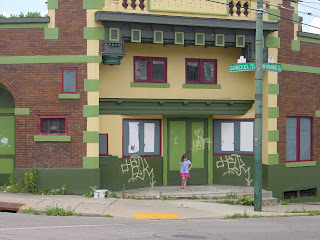 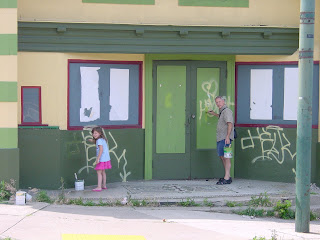 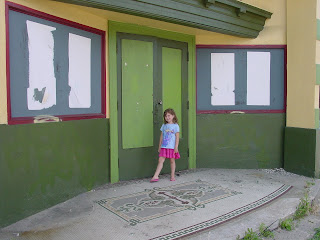 Leading by example. I wonder what kind of mayor my daughter will be in 30 years.
Posted by Gary at 12:52 AM 1 comment: