Clean Up in Southwest Dayton 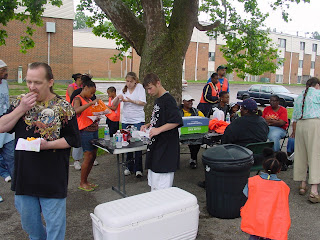 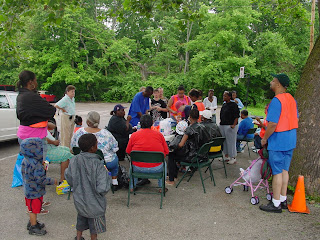 On June 18, 2009 a group of people came together from all over Dayton to participate in an "Adopt-an-Area" clean up. The clean up area was the Western Ave. Apartments between the 1700 and 1900 blocks of James H. McGee Blvd. The event was organized by Ms. Shallon Coleman who founded "Abigail's Journey, Inc." which is a non profit that caters to people in need. People volunteered from the apartments, from "Project Cure" and neighborhoods from all around Dayton.
Shallon and I had a discussion several months ago. We both felt that the time has come to unite Dayton. One way to do this was to have people come together from all over the city for a common goal. It is also time to educate people about those programs that are already in existence and under utilized. Adopt-an-Area is one of those programs. I have learned as a community leader that telling people about a service or program doesn't mean that people will use it. Showing them how it works will at least make people understand it and they have the ability to teach others who need the service or program.
Anyway, there were about 40 people working together having a good time while they cleaned up trash and yard waste around the designated area. This is the 4th year that Shallon has organized this clean up and it will be an ongoing occurrence.
More neighborhood groups have to reach out the hand of unity across perceived boundaries in this city if we going to make it great again. This is the dawning of a new era. One that is long overdue.

There will be more joint clean ups organized this summer. I will keep you informed. The neat thing is that the volunteers were very impressed when they learned who I was. I had been working amongst them for several hours before it was announced. They had seen me jumping up and down in the dumpsters trying to compress the trash so that more would fit in. I wasn't afraid to get dirty and they were able to realize that I am the alternative to Rhine McLin.

Here is a picture of Shallon Coleman. If you see her in the street you need to thank her for what she is doing. This is one dedicated woman. 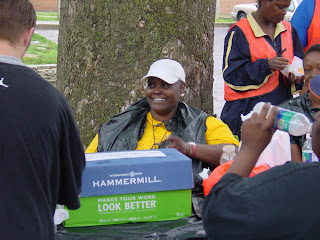