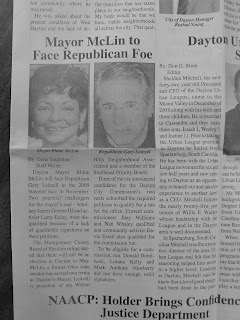 This weeks Dayton Weekly News published the above article. The Dayton Weekly News is a weekly African-American newspaper published locally. The writer did not contact me regarding the story and got the photograph of me from the Dayton Daily News. For the record, my five year old daughter took the photograph in December 2008 so that the Dayton Daily News had a photograph of me for the story that they ran that month announcing my intention to run for Mayor.
I spoke with the editor of the Dayton Weekly News today. I informed him that I am an independent candidate in a non-partisan, local mayoral race that has been endorsed by the Republican party. His paper's labelling me as being a Republican candidate is wrong and should be corrected. He assured me he would make a correction. I also gave him my contact information should his staff wish to contact me in the future.
I have nothing against Republicans. I have nothing against Democrats. I am very centralist in my views and to be branded as being for either party would be wrong information. I am about being fair to all of the citizens of Dayton, regardless of their party affiliation. I can only hope that I will be treated fairly in the months ahead.
Posted by Gary at 11:04 PM

tired of the McLin dynasty said...

Not that I am a big fan of DDN, but why did you claim it to be an African-American newspaper? Heaven forbid you offend anyone and ruin your chances!!! Seemingly so far I am soooooo voting for you. This is what true Daytonians need-a leader who will empower the people to get their heads out of their butts and start doing things for themselves!! Go Go Grassroots Movement!

This article was published in the Dayton WEEKLY News which is a once a week publication that targets the Dayton area African American community. I look over it every week because some of the articles are interesting and a leader needs to have their finger on the pulse of the entire community. Not just the one that they choose to live in.